Contracts are agreements between your company and another entity for bulk or custom orders. In some cases, they can be pivotal to the success or failure of your company.

The game offers several types of contracts with different requirements. You can find a basic tutorial on how to use the contract system on the Office page.

See the Contracts Game Mechanics chapter for a more detailed breakdown of the formulas behind requirements and selection.

Militaries can also order vehicles. Militaries will only order limited types of vehicles at this time. But they're often bulk orders and can be very profitable.

When nations go to war, military orders will increase both in terms of designs and volume. But you'll be limited to only supplying your HQ nation from factories located in your HQ. Military Contracts for your HQ nation are the only type of production not limited by conflicts in the game.

Civilian contracts can run the broad gamut of vehicle types and engine designs. These contracts can be for everything from local government vehicles, taxis, rentals, train engines, and home generators.

Most of these contracts are bulk orders, but they're unlikely to be renewed frequently, unlike military contracts. It's often wise to use your existing designs for these types of contracts.

Racing contracts focus on vehicle types used in racing and the components used in spec racing. When it comes to vehicle contracts, you'll get some credit for the success of the vehicles. However, for engine, gearbox, and chassis contracts, you will receive none. Racing contracts typically order very few units, but they pay more per unit.

When a racing contract goes unfilled, the teams or series can purchase designs from the open market. When this happens, they may purchase your designs, even though you have no associations with the team. There is no way to prevent this action since they are purchasing the designs as regular consumers. 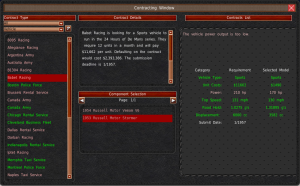 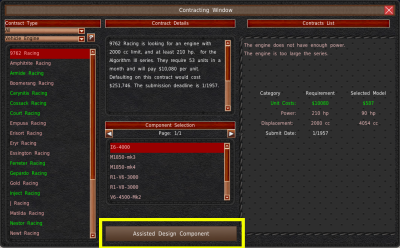 When accessing the Contracts system from the Research and Development room, the game will give the option to use the assisted designer for engines contracts.

This system is only available for engine contracts.

How winners are selected

The game uses a system similar to the buyer rating system to calculate a value for your contract bid. For this section, we'll refer to that value as the bid rating. The game then compares your bid rating to the bid ratings from other submissions. The bid with the highest value wins the contract.

The formula for this rating changes based on the contract type and the design needs. Suffice to say, the better the ratings and cheaper the price, the more likely the customer will select your design.

Internally, there is also a minimum bid rating that all submissions have to reach to be acceptable by the customer. This minimum bid rating decreases based on the number of design submissions. If no designs meet the requirement, the customer will approach an outside engineering design firm. We do not simulate these companies in the game. We do not refer to them by name, nor do we give information out about the designs.

If the customer doesn't specify the price, they are likely to automatically reject bids that have higher than 200% markup over unit costs.

Once you win a contract, you'll need to produce the units and ship them out.

Congratulations on winning a contract. When you win a component contract, and that component is not assigned to a production line, and auto-production is not enabled, the game will pop up a warning window.

This window will take you to the Assign Contracts portion of the Mega Menu. You can also access the same screen via the “Contracts” button in the top bar of the World Map. 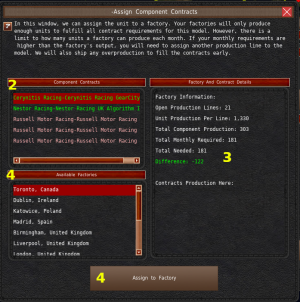 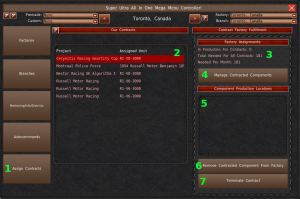 The Assign Contracts panels are how you will assign component contracts to production. If you're in the office, you can access this system by clicking the “Assign Contracts” (#1) button in the Mega Menu.

The game lists your contracts in the left-most list (#2). You have adequate production of any green entries. But you are not producing enough to meet the requirements for red entries.

Selecting a contract from the list will load its information into the right-side panel (#3). In particular, you want to pay attention to the “Total Needed For All Contracts” value. This line indicates how many units you need for all contracts. Just below that is “Needed Per Months.” This variable is the monthly number you need for this design for all contracts.

When you assign a component to a production line, the game will automatically make as many components as needed up to the maximum number of units for that line. So if you have multiple contracts using the same design, you can normally fill them from the same production line.

To assign a component contract to production, click the “Manage Contracted Components” button (#4). This button does not appear on the world map. If you're on the World Map, you would select the factory you want to produce the design from the list (#4), then click the “Assign to Factory” button (#4). The Office Mega Menu will show you this list and button in a new window upon clicking the “Manage Contracted Components” button.

When a factory is assigned to produce the component used for the contract, its location will appear in the right side list (Mega Menu #5, World Map “Contracts Production Here” #3).

You can remove a component from production in the Mega Menu by selecting the location from the list (#5) and then clicking “Remove Contracted Component From Factory” (#6).


Finally, if you wish to terminate the contract, you can do so with the Mega Menu tool by clicking the “Terminate Contract” button (#7).

Vehicle production for contracts works exactly like normal production. However, if you do not have enough vehicles in production to fill the contract, the game will warn you with a pop-up notification.

Shipping for contracts is free in the game. And when it comes to vehicles, contracts get top priority over consumer vehicles. Because of this, you might want to choose which factories a contract should get units from. 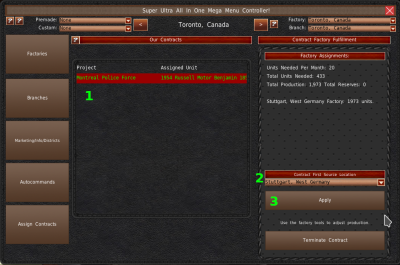 To do this, you'll need to use the Assign Contracts window and select a vehicle contract from the list (#1). The dropdown on the right side of the window (#2) will populate with the factories that produce this model. Select the factory from the dropdown that you want contracts to source units from. When you have selected the factory, click the “Apply” button (#3).

The selected contract will now pull vehicles from this factory first before it pulls units from other factories. Component contracts do not have this feature.

When nations fall into a major war, consumer vehicle sales often stop. And vehicle production is often halted as well. Wars can hurt some companies, but others will thrive in these conditions. They do well through the contracting system.

When a nation enters war status in the game, they terminate contracts for all foreign companies. They also restrict bidders to only companies whose HQ are in the same country. For example, if you run a British company in 1940, it can not bid on German or French military contracts. But you would be able to bid on British military contracts. Countries at war will generate significantly more military contracts based on the size and per capita of the country.

Military contracts are often for many units, and they renew frequently during the war. It is a smart idea to be ready in advance with designs that might work. Base your work off existing contract requests.

When one of your factory locations enter a major war, the game gives you the option to produce munitions. When you produce munitions, the game locks you out of the vehicle production system. You can not produce anything else at the factory, and you can not change your munition production status until another factory location enters a war. In addition to this, the game only provides limited options for selecting munition production locations.

The game will automatically end munitions production when the war is over. 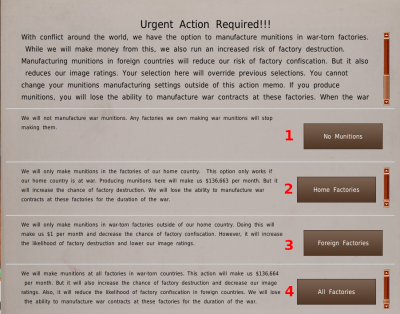 When a war begins at a factory location, the Munitions action memo will appear. This memo gives you four options. And you won't be able to change these selections until another location enters the war. The area beside the buttons describes the action, but we'll also cover it somewhat on here. 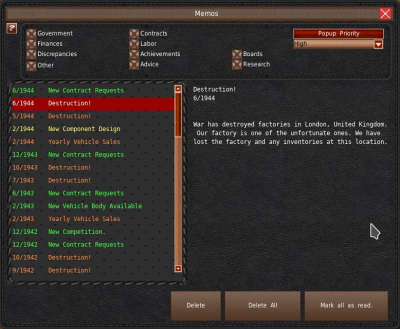 Producing munitions greatly increases the chance of factory destruction. This can be from mistakes made on the factory floor or targeting by the enemy. Either way, when your factory is destroyed, you'll receive a high-priority memo.