As your company grows large, it becomes more tedious work to handle. Luckily the game allows you to manage multiple factories and branches as if they were a single entity. This system is called the Districting system.

The districting system groups together cities in a geographical area and allows you to operate them as if they were one large group. There are predefined districts based on their country and region. And you can create custom districts with your city selections. 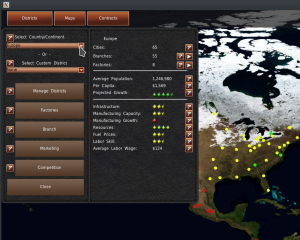 The full districting system is on the World Map. However, the Mega Menu contains limited functionality for branch distribution and factory production.

You can find details on the Districting GUI on the World Map page.

From this menu, you can access the same features that are in the individual city menus. Instead of individual cities, it is multiple cities with their information accumulated and averaged where applicable. 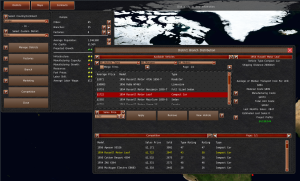 Using the districting system can decrease the amount of labor you have to do when your company gets large. It also allows for more fine-grain control over your company than using Automatic systems.

For example, let's say you have 100 branches selling a vehicle. You could set a single price for all the branches using “Apply to All.” But what if you want the vehicle to be more expensive the further away it is from your factories? You would have to go to each branch and set a price. Instead, using the districting system, you can select the regions or countries further away and set the vehicle price in all those branches with one entry.

The same concept is true with production, marketing, and viewing the competition.

Here are some things to know about the districting system. 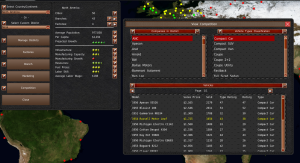 Using the District Info panel and the Competition window, the districting system used in the World Map is a great way to get summary information about a region or the world.

The shipping lock to district function stores the city ID numbers to the sales database entry. If a district is renamed or destroyed, the ID values remain saved, even if the district no longer exists.

The “Restrict Shipping To Same Region/Continent” settings for Autoproduction does not work on Custom Districts. Also, district shipping restrictions do not work when Autoproduction is enabled.