Over time, your designs become stale to customers. When this happens, your buyer rating will decline, and fewer people will buy your vehicle if there are other options. For vehicles, this design penalty begins when the design is 5 years old and increases every year after that. For components, the effects are smaller, but they will penalize your buyer rating starting at 15 years old.

That is where the New Generation system comes into play. A new generation is a freshly designed vehicle that matches in name and characteristics with a previous design. They are not the same vehicle models, even though they share the same name.

Do not confuse this with a model year, which is the year the company manufactured that vehicle. Companies often produce a generation over multiple years. The game only displays the generation year and not the model year in the name.

If you were to produce a new generation of the VENT Model A in 1980, the game will display it as the 1980 VENT Model A. Its parent model will remain the 1975 VENT Model A.

In summation, there is no need to produce a new generation every year.

Every vehicle in the game has what is called “Vehicle Image.” (Link to vehicle ratings) This image rating is a major factor in how consumers see your vehicle and the choices they make.

One of the benefits of creating a New Generation is that it inherits the previous generation's image ratings. This allows you to grow the model family's image ratings when planned out over multiple decades. You would want to do that to increase your buyer rating, thus increasing your vehicle sales. 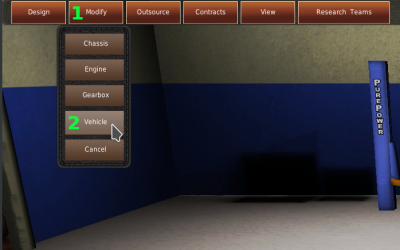 Making a New Generation is very similar to making a vehicle design. First, you'll need to go to the Research and Development room. Click the “Modify” button at the top of the window (#1). Then select “Vehicle” from the menu (#2). This will open the Vehicle Modification window. 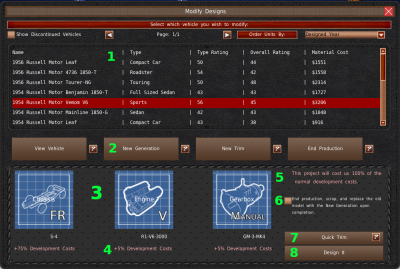 You'll need to select the vehicle from the list (#1) that you want to make a new generation of. Then click the “New Generation” button (#2) to open the New Generation Panel.

Finally, you have two options. If you plan on not making any changes to your sliders or body design, you can click “Quick Trim” (#7). The game will skip the designer phase and quickly make your new generation, thus completing the design.

But if you want to adjust sliders or make changes to the vehicle body, you'll need to click the “Design It” button (#8). 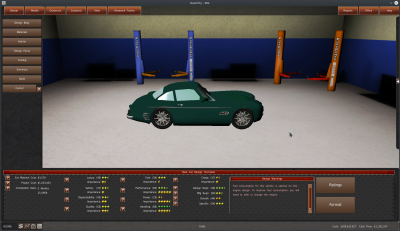 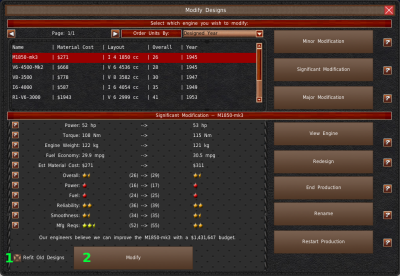 If you plan on making modifications to your component designs, the game gives you the option to make new generations of the vehicle using these designs with the “Refit” system.

To use the refit system, you must check the “Refit Old Designs” checkbox before modifying the component. Click the “Modify” button (#2) when you're ready to modify the component. This action will open the Refit window. 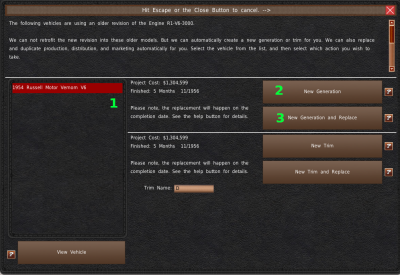 The refit window is broken into two parts. The vehicles that were using the design are in the left list (#1). Vehicles entries that are yellow have already had a new generation designed recently. Selecting a vehicle from the list will load its information. In the center-right section, you'll find the costs and buttons to make the new generation (#2, #3). The “New Generation” button will create a New Generation of this vehicle, using the same components like the previous generation, except with the latest revisions. The “New Generation and Replace” button (#3) will do the same, except it will also replace the old design with the new design in all factories and branches. And it will end the production of the old design.

The New Generation system can be a powerful ally in raising your buyer rating for vehicles late in the game. And in the short term, the discounts they provide are also helpful. There are cases where designing a new design makes more sense, such as with designs that have had reductions to their image ratings.

As previously mentioned, older vehicles designs begin to hurt your buyer rating after 5 years. And component designs reduce buyer rating starting at 15 years old. Every year, these penalties increase in severity. But for a couple of years, they're not that bad. With that in mind, you can use the New Generation system to work within those boundaries.

For example, six years after making a completely fresh design, make modifications to two of the three components of the design. And then do a modify and refit of the final component. When using the refit system, use the New Generation and Replace option. This new generation will be ready for production by the 7th year. Because you're reusing the same components, the design costs are discounted. When the 13th or 14th year rolls around, you'll redesign the component from scratch, and when they're complete, you design a new generation the traditional route, using the new designs. Then repeat the process.

By going this route, you've made 3 generations of vehicles with minimal penalties. And you also received a discount for your middle generation refresh while carrying over image ratings to each generation. In another 7 years, you'd do your fourth-generation at a discount.