While you probably already know how to design a vehicle in the game, there are some things you can do to optimize your design for maximum sales or ratings to costs.

Knowing the market is critical to making a successful vehicle, especially if you're trying to make a best-selling or extremely profitable design. If your aiming to build high-end niche vehicles, what the market wants is less important than designing a great model.

The first thing you need to do is know where you're going to sell your vehicle and some information about that market. The two most important pieces of information are the population and the per capita. You can get both of these data points using the city information window. Or using the district information window if you are selling to a broader area.

Per capita, on the other hand, is the average income for the population of the city. The more wealthy a city is, the higher the purchasing power of the population. That translates into greater sales or higher amounts you can charge. 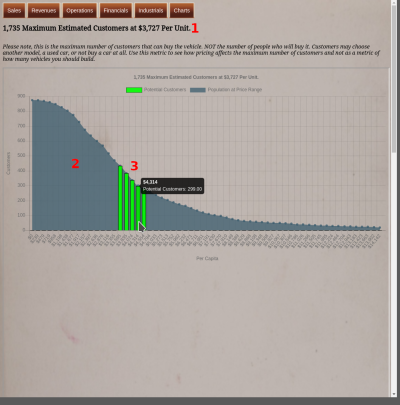 While you can't see it without creating a vehicle, the wealth demographics chart shows the distribution of buyers based on income. See the included picture.

As a rule of thumb, you should not sell a vehicle for more than 5x per capita. There are exceptions, depending on the vehicle type and the year you're in. But when in doubt, this is a good rule to follow.

If you're looking to design a popular vehicle, you'll need to do is check the Vehicle Body and Fuel Type Popularity tables. You can find more information about this report on the reports page.

Looking at each region you're interested in selling the vehicle, click the column headers to order the vehicle types. You're looking for vehicle types that are popular in every region. Normally, this is phaetons in early game years and sedans all the time. Some regions may prefer Hatchbacks, Crossovers, and SUVs, especially in the later game years.

When it comes to fuel types, you'll typically want to use Gasoline for a best-selling vehicle. Be sure to check that any fuel type you use has at least a few percentage points in popularity. Otherwise, you won't sell any.

What Year Is It?

Another factor to consider is what year it is. In the early years of the automobile industry (pre-WW1), vehicles were new. Only the wealthy could afford them, and people were willing to spend a lot more than they could normally afford to get them. Because of this, the upper ends of the wealth demographic were not only willing to spend much more money, but they were also willing to buy vehicle types they otherwise wouldn't normally. This means that in the early years, you can charge more than 5x per capita. The results will not be as bad as in later years.

In later years, fuel prices can dramatically increase the importance of the fuel economy rating. And automatic transmission types are almost required for luxury vehicles. Consumers will demand more for their money, and they won't be willing to spend more than they can afford.

What Ratings Are Important

The most important rating when designing a vehicle is the unit costs. This variable can affect margins or allow you to undercut your competition. But less obvious than unit costs are the vehicle ratings themselves. While having the most ratings possible in every category will produce the best vehicle, it will also likely make the vehicle too expensive. This is especially true for lower wealth demographic vehicle types.

Each vehicle type has an “Importance” rating attached to every rating category. These importance ratings weigh differently on vehicle ratings, making some ratings more important than others. When designing your vehicle, you should focus more effort on improving those ratings instead of improving lesser important ratings.

The same concept extends to creating and selecting components for your vehicle designs.

Where to Find Importance Ratings

You can find a full listing on the vehicle types data page. And the Vehicle Design page shows how each rating is effected by design choices in the game. 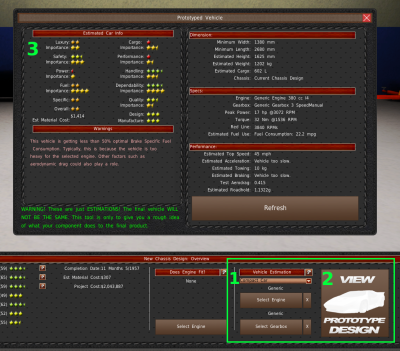 Using the Advanced Component Designer for chassis, engines, and gearboxes allows you to access the vehicle type importance ratings via the Prototyping system. To use this system, select the Vehicle Type from the Vehicle Estimations dropdown (#1). If you want a more accurate estimation, you can pair other components with the buttons below the dropdown. 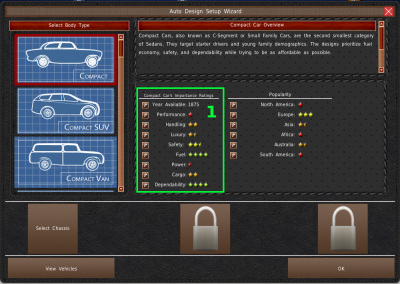 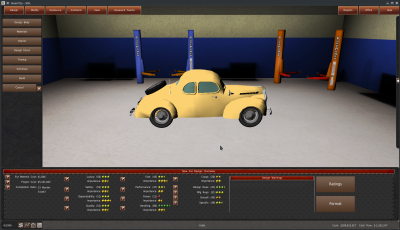 The second place the game shows the importance ratings is at the bottom of the Advanced Designer. Under each of the vehicle's current ratings, you'll find golden stars. Those stars are the importance rating for each category. The more stars indicate which ratings are more important is to this vehicle type. 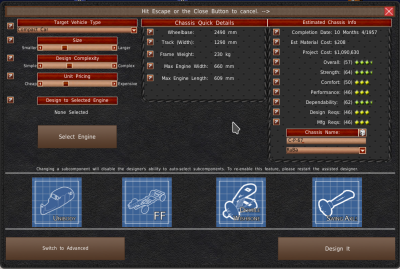 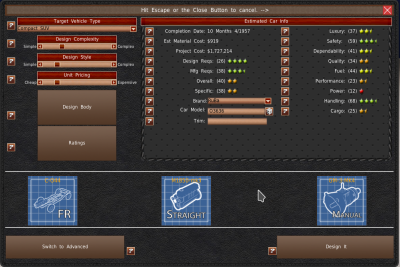 If you're using the assisted designer, the game will not show you the importance ratings of the selected vehicle type. Instead, the assisted designer will consider the importance of ratings and attempt to maximize the ratings in the most important categories. You do have the option to switch to the advanced designer with the “Switch to Advanced” button in the bottom left of the window. But please note, you can not switch back from Advanced to the Assisted Designer.

When designing vehicles for lower wealth demographics, you should focus on keeping the price low and maximize the ratings with high importance values. This way, the design will have a higher buyer rating at lower costs. When making higher-end vehicles, you should still prioritize the more important ratings, but you won't have to sacrifice as much.

You should also consider the marque's strong point. For example, if the marque makes primary Luxury cars, then making an economy car with very little Luxury will hurt the brand overall.