Music adds an extra flavor to the game. The game plays certain music at certain points in the game. It also can limit music to a certain period of time. All music files are in .ogg format. If you want to add, alter, or remove music from the game this is the editor you would use.

Files and How it Works

When the game is launched, the program looks at the Music.xml file for a list of songs files to load, as well as where and when to play these songs.

When a song is selected, the game looks into the music folder for the file listed in the Music.xml list. If it is found, the song is played. If it is not, the game crashes. (So be sure all your music is there!) Music must be in .ogg format.

This is the Music Editor. The following picture will break down the parts of the editor and tell you what they do. 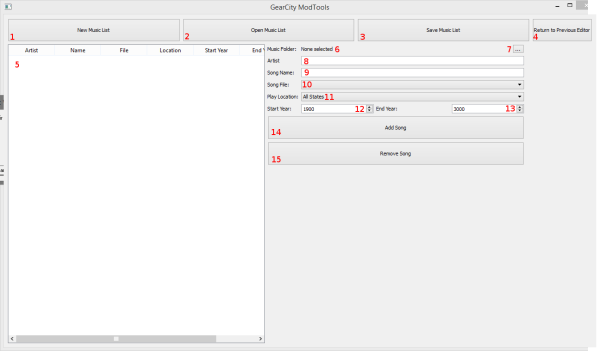 Most likely you did not include the song files in a location where the game can load them. Or you did not convert the files to the ogg format.

The only other thing that could cause this is if the file name is incorrect in the Music.xml file. Please remember that file names are case sensitive.

Some Songs or Sound Effects Not Playing