When the player opens the newspaper, there is a good chance that not much has gone on in the game world. Instead of giving the player an empty newspaper we instead fill the paper with trivial filler articles that you would normally find in a local news paper.

These filler articles are selected randomly from the list in this editor. Articles for historical events or player/ai actions are generated in the turn events and in game files respectively.

Files And How It Works

At the start of the game, the NewspaperArticles.xml file is read and stored in the game. Upon generation of a newspaper.html file, if there are not enough articles to fill the paper, the game will randomly select an article within the year range from this list. That article is then displayed in game.

The articles themselves are html. As such you can use html styling when creating the articles.

The following picture is of the newspaper editor. Below it we will break down the parts of this editor. 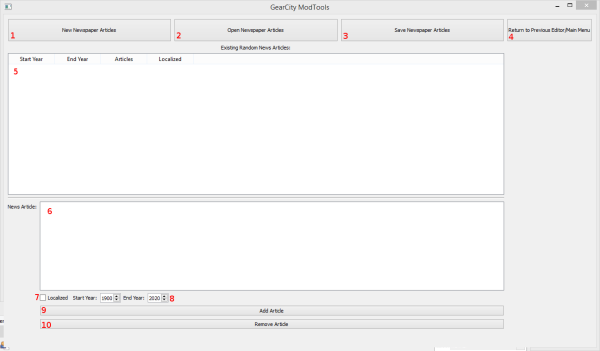 Articles are Not Appearing in the Newspaper

Be sure that your included the NewspaperArticle.xml in a place that the game can see it. For example if you're making a mod file, include it with the mod and load the mod.