Racing is an important way to improve company image, increase sales, and if you do well, generate some revenues. But since all vehicles are not the same, there are many different racing series that the player can compete in. They have different rules and regulations. And they have different costs and different rewards.

This editor allows you to add, remove, or edit the race series in the game. It handles the series on a series level and does not effect the results of racing in the series.

Files and How It Works

As such any changes to the RacingSeries.xml file requires the player to start a new game for the changes to take effect.

The following is the editor for Racing Series. We'll break down the parts of this editor and give you some information on several of the variables. 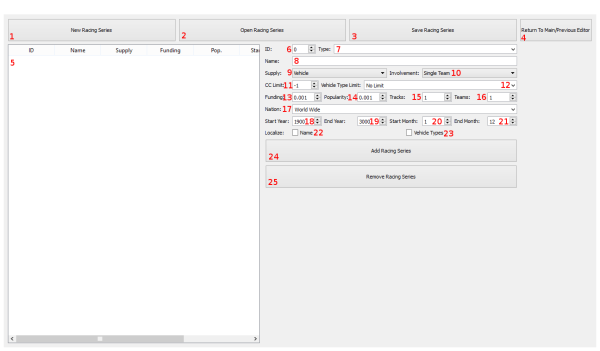 We'll break down some of the most common issues you may come across creating a RacingSeries.xml file.

New Racing Series Not Showing Up

Changes to the RacingSeries.xml requires a new save game. Also be sure that the file has been included with the game and if in a mod file, it is loaded by the game.