Marques are additional vehicle brands your company owns. You have complete control and operation of these brands, and they act as part of your company even though you sell them under a different name and logo.

Marques have their own image ratings and seemly operate as a different company in the public's eye, even if they're really just part of your company.

There are many reasons to start a marque, but in general, it's to separate different categories of vehicles. So they do not negatively impact the image ratings of the brand.

Another situation where Marques can be helpful is if you want to separate brands by region or if you want your marque's production to be limited to factories they own. For both of these situations, you can use marques to shape production and shipping on a regional level. For example, creating an American and European marque and only selling the American Marque vehicles in America and the European Marque vehicles in Europe will prevent cross-ocean shipping and allow variance in the models' ratings and specs.

How To Get A Marque

One of the more common methods of acquiring a marque is to purchase other companies. The game offers several ways to do this. 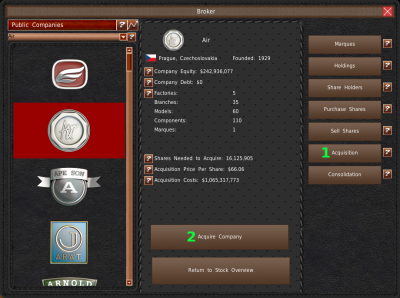 See the Financials GUI page for more information about the UI. 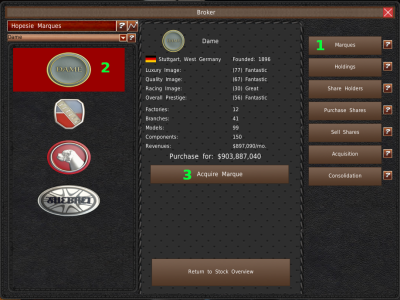 If you want to purchase a marque from a company, you open the stockbroker window and select the parent company. Next, you click the “Marques” button (#1). The list will now populate with marques of the parent company (#2). Select a marque from that list. The price and information about the marque will appear in the center panel. Finally, click the “Acquire Marque” button (#3) to purchase the marque. If the marque is not for sale, this button will not appear.

See the Financials Room page for more information about the GUI. 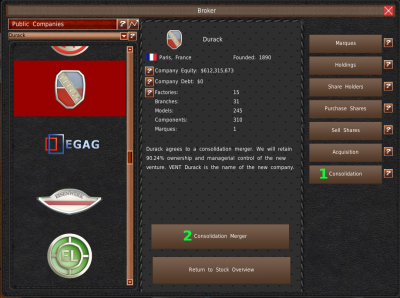 See the Financials Room page for more information on the Consolidation GUI.

Starting Your Own Marque 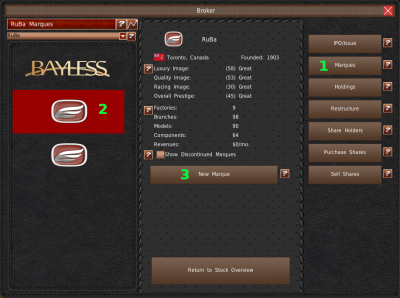 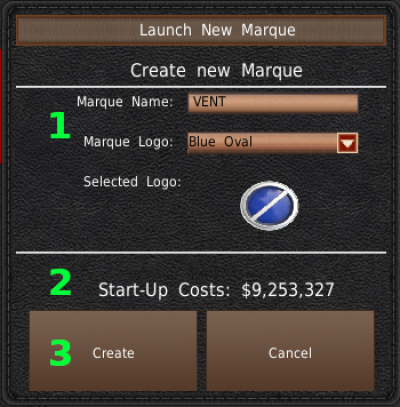 You now have to fill in information about the new marque. You'll need to enter the name and select a logo at the top (#1). While creating a marque is cheaper than buying a company, it still costs money. Those start-up costs are found in the middle section (#2). Finally, to create the marque, click the “Create” button (#3). 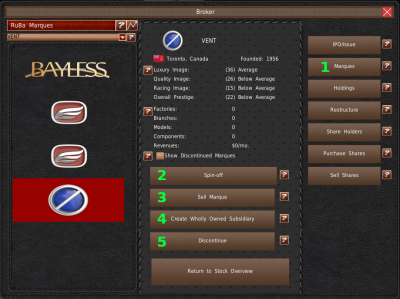 If you want to get rid of a marque, you have several options. First, access the list of your marques in the Stock Broker window by selecting your company from the list and then clicking the “Marques” button (#1).

Next, select the marque you want to manage.

The game gives you four different options to stop managing a marque (#2, #3, #4, #5). These are covered in the next sections in order from top to bottom.

For more information on the Marque Panel of the Stock Broker window, see the Financials Room page.

A Spin-Off will make the selected marque an independent company. You retain an equal percentage of the spin-off as you own of your own company. For example, if you own 28% of your company's shares, you will own 28% of the Spin-Off's shares. The remaining shareholders of your company will own the other 72%. The Spin-off will manage its self with its own CEO. You will have no input in the company unless you own 50% of the company's shares. If you own 100% of your company, then your Spin-off is classified as wholly-owned, which we cover two sections down. 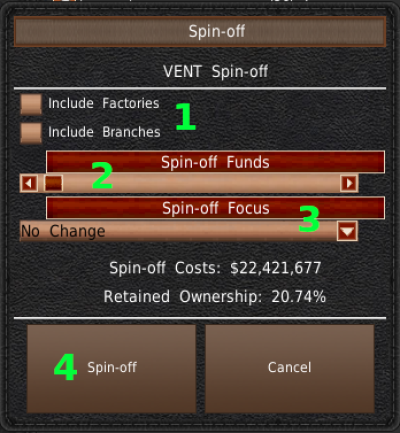 Upon clicking the Spin-off button, the Spin-off window appears. At the top of this window are two checkboxes (#1). When enabled, these boxes include the factories and branches that the marque has ownership of with the spin-off. If left unchecked, you will retain those facilities.

Companies need seed money, and a spin-off is no exception. You can use the slider in the middle section (#2) to adjust the starting funds for the company.

You can also adjust the behavior of the spin-off using the Focus drop-down box (#3). This setting allows you to change the behavior variables for the AI company to a predefined value. The behavior variables affect which type of vehicles they make and their slider preferences when designing vehicles. It does not give you complete control or restriction over the company, nor do these variables do the same. It's merely a way for you to influence how the company designs models before you set them off on their own.

Finally, to spin off a company, click the “Spin-off” button (#4). The company will now operate as an independent company free of your influence. If you own more than 50% of the company, platform sharing is still an option. You can also adjust dividends and be automatically approved to reacquire the company.

Selling your marque will give you the maximum short-term gains. Select a marque from the list and then click the “Sell Marque” button to sell the marque. 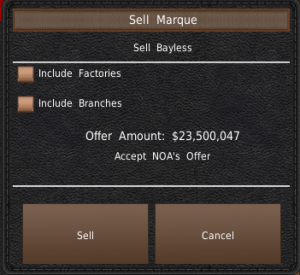 A new window will appear. At the top of this window are two checkboxes that allow you to include the factories and branches the marque owns along with the sale.

A Wholly Owned Spin-Off works the same as a Spin-Off, except you own 100% of the shares of the spun-off company even if you do not own 100% of your company's shares. 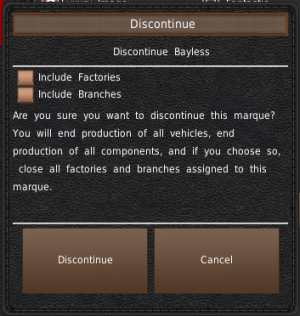 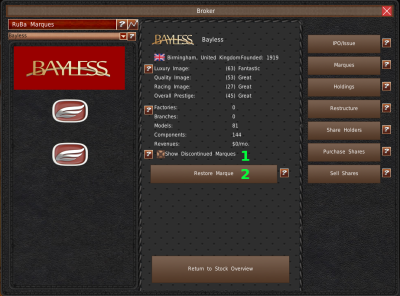 If you want to restore a marque, you can do that too. Check the checkbox called “Show Discontinued Marques” (#1) in the Marque panel of the Stock Broker window. By enabling this toggle, the game will display discontinued marques in the marque list. Select the marque you want to restore, and then click the “Restore Marque” button (#2). If you do not see this button, the marque is active.

Restoring a marque will not restore discontinued vehicles or components. Nor will it reopen any closed factories or branches. 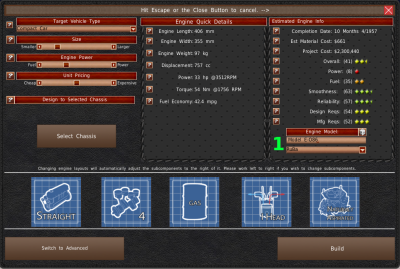 The most common way to use a marque is in the design phase. Your designs have a major impact on image ratings. So it is a wise idea to utilize certain marques for certain types of vehicles. To do this, you need to select which marque has ownership of a design before you complete the design. Design ownership also plays a critical role in the value of a marque when selling it, what a marque gets when you spin them off, and what the game discontinues when you end a marque.

The included images show the location of the Marque selection dropdowns (#1) in an Assisted designer and Advanced designer systems. The locations are similar for both vehicle and component design systems. 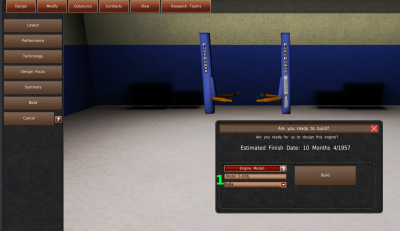 The game also includes a way to change ownership of components using the modify component system using the “Rename” button. See the Research and Development page. 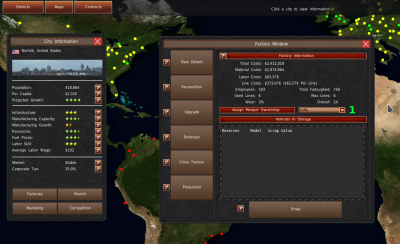 You can also assign marques ownership of Factories and Branches. This increases the resale value of the marque and is important if you choose to include them when spin-off the company. Factory ownership is a factor in a specific autoproduction setting that you can use to limit the production of a marque's models to only the factories they own. 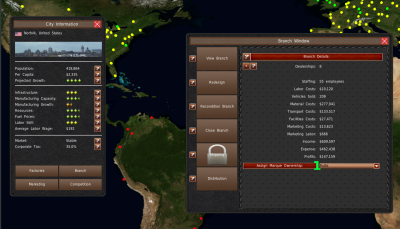 Both of these pictures show you the location to assign ownership of a factory and branch. Use the dropdown box (#1) to select the owner. You can find these settings in the View Factory and View Branch panels, respectively. See the World Map page for more details. 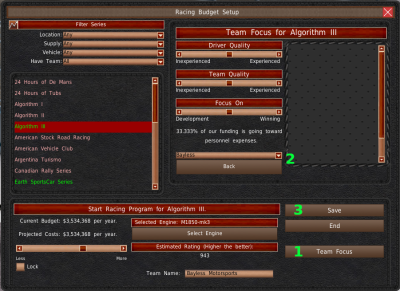 You can also assign marque ownership to your racing teams and racing series efforts. This is a great way to boost the performance and racing image of a marque.

To do this, click the Team Focus or Series Focus button (#1) for the race series. Then in the Focus panel, choose the market from the dropdown (#2). Finally, be sure to save your changes (#3). 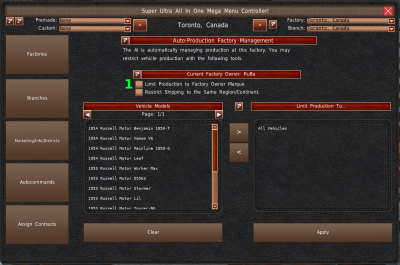